First, a follow-up to last Wednesday's Western.  This week we watched the movie adaptation of Paul St. Pierre's Breaking Smith's Quarter Horse.  It is vastly inferior to the book, as I suspected it might be. 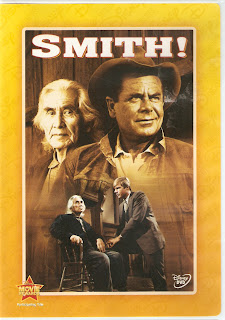 The movie is retitled Smith! but the protagonist, played by Glenn Ford, is a man who trusts the bureaucracy of the law, much different than the existential Smith of the novel.  In the book, Smith is a natural man, an everyman who sees how things are beyond the political correctness of the times.  In the movie, he urges Jimmy Littleboy to do "the right thing" and turn himself in.  Not so in the book.  The Smith of the book is a bit like Elmore Leonard's Hombre, naturally going his own way and letting others be free to do the same.
The movie turns motivations around and adds noisy melodrama to what is a simple, understated story.  The opening focus of the movie is a father/son relationship in keeping with the YA movies then shown on the Mickey Mouse Club.  Smith's quarter horse is changed into an appaloosa that Chief Dan George's character is breaking for the boy, probably to enhance the Nez Perce connection.  But it then loses all symbolic value in the movie, all sense of a McGuffin.
One of the beautiful things about the book is the relationship between Smith and his wife.  Much of the charming dialog between them was taken out for the movie and replaced with melodramatic fluff.  Glenn Ford could have played it right, but Nancy Olson was miscast as his wife all the way around.
Chief Dan George was a natural for the part of Antoine, and a sun-tanned Warren Oates plays the interpreter Walter Charlie beautifully.  I was surprised to see Jay Silverheels (famous for playing the Lone Ranger's sidekick, Tonto), but he was appropriately cast here.
This movie is a pro-American Indian artifact of its time, issued a little more than a decade from the Eisenhower Administration's policy of seizing American Indian reservations under the ruse of "helping" Indians assimilate into the American mainstream.  Despite the treaties, American Indians were abruptly and systematically forced from the land and dumped into the ghettos of big cities.  The intense political lobbying of a few American Indian leaders, Osage Richard W. Freeman among them, finally got this policy reversed.
The ending of the movie is sugar-coated, in the way of such Disney movies of the time.  But the book is understated, comical, metaphorical, humanist, and well-worth seeking out. 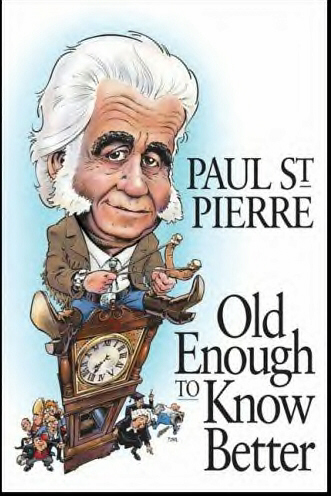 Paul St. Pierre also makes my list of authors who are spiritual naturalists, always taking potshots at organized dogmatic religion while maintaining a spiritual core coupled with a sense of naturalism. I also added western author Win Blevins to the list after reading his surprising The Rock Child: A Novel Of A Journey.  I'll be reviewing it here soon.

I'm now just finishing up Paul St. Pierre's book of essays, Old Enough To Know Better, which has some very good things in it. I'll be quoting him at length first chance I get.
Posted by Richard L. Pangburn at 9:46 AM