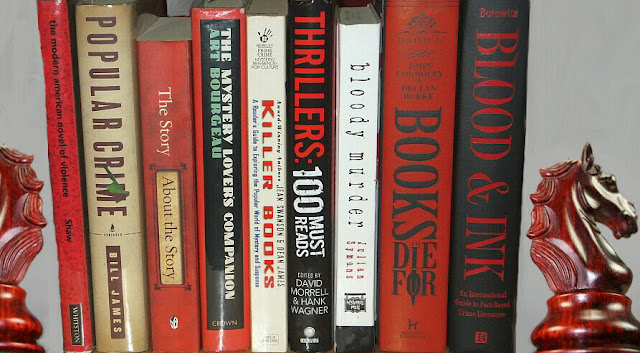 Books to Die For is a sumptuous feast.  It is not an overlooked book but rather a means of discovering overlooked books.  A large new handsome volume in easy-to-read print, an anthology of writers on writers, each discussing a work of crime fiction which they found particularly inspiring or thrilling or brilliantly crafted--or by some other alchemy worthy of shouting about. 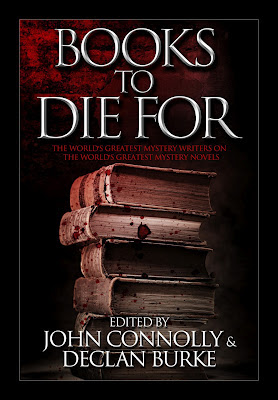 The book was put together by two Irish mystery/thriller author/editors, Dr. John Connolly and Declan Burke.  I've blogged about Burke here before (link), giving links to his blog a number of times and praising his award-winning novel, Absolute Zero Cool.  Burke is also the editor of Down These Green Streets, another wonderful anthology (link) that belongs on the same bookshelf as those in the picture above.

In Books to Die For, more than 120 authors from twenty countries contribute to name the best in crime fiction.  A must-have for readers searching for that peak reading experience, for another voice in the mode of their own favorites.  The many authors reveal their own tastes and writing styles as they tell about what books they find especially appealing and why.


Relatively new readers to the genre will be enticed; the longtime crime fiction affectionados will find new insights into books they have heard of but have for some reason passed by.  The book is balanced.  The history of the genre is well represented--many of the classic crime novels are here--but there are also many surprises including some very literary crime novels, and some truly little known gems.

My copy came from Amazon.uk as the book will not be available in the United States until sometime in October.   It is a handsome large hardcover, 734 pages of luxuriously easy-to-read print.

I'll be blogging about individual essays in here as time goes by.  Of course, not every book is for me.  I know already that I'll never be a Mickey Spillane fan, despite Max Allan Collins' eloquent defense of him in here.  Not my cuppa java.

But the next essay I read was Paul Johnston's contribution on Philip Kerr's A Philosophical Investigation, written thirty years ago but first published in 1992.  I'd forgotten about this one, since the author has gone on to win awards with his Bernard Gunther series.  Johnston's sharp descriptions and explanations have inspired me to read it again, and I am sending for it tonight.

Also, the biographical info at the end of the essay reveals that Paul Johnston, of whom I had never heard, is an award-winning author himself, with a backlist of several intelligent-looking books.   Now I'll also have to check those out.

Books To Die For was not meant to be read end-to-end, straight through, but rather to be dipped into from time to time.  The next time you're seeking a significant read.
______

This is an extension of the Friday's Forgotten Book series, one of many, and you can read the other authors and bloggers at this link. .
Posted by Richard L. Pangburn at 2:39 AM